Learning to Let Go from Eisenhower 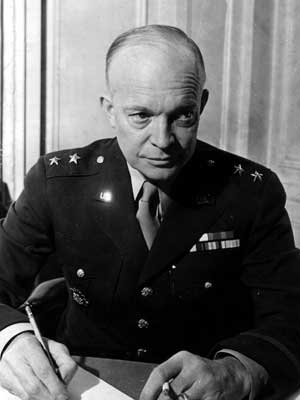 Well, General Eisenhower didn’t personally teach me, but I learned an important lesson about letting go while watching a documentary on the Invasion of Normandy.  After the good general gave the order to invade on June 6, 1944, he realized that the success of the mission was no longer in his own hands.  It was now in the hands of thousands of individual platoon commanders and their troops.  Eisenhower had done all that he could to create the conditions for success, now all he could do was to allow those conditions to come to fruition on their own terms.  From the moment he gave the order, he had no choice but to let go of outcome.

Hence, the key lesson is:  Focus on the effort, but let go of outcome.  This is a combination of two seemingly contradictory mindsets: pro-active optimism and letting go.  We can practice them both at the same time, and it turns out to be an optimal strategy.

And that is true even for a great military leader.

Funny Thought: How to Exchange Money for Food

One Billion Acts of Peace

Shelling oysters no more, thanks to you

Shinzen Young on the in and out of attention (and enlightenment)