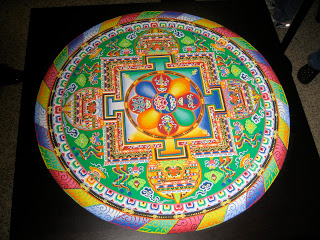 Back in December 2010, we had a group of Tibetan monks make a sand mandala at the lobby of Building 43 in the Googleplex as an art and cultural exhibition.  Many Googlers did not know what a sand mandala was, so I had to put up a FAQ.  Some of you may find it useful, so here it is:

Q: What is a sand mandala?
A: A traditional Tibetan art form for blessing the earth.  Monks create an intricate pattern out of colored sand over 5 days.  At the end, the mandala will be destroyed to signify impermanence of all things (sort of like writing code).

Q: Can I take pictures?
A: Yes, you can take pictures of the mandala, monks, and anything else, including the occasional ninja that likes to stealthy appear at mandala-making events.  You may take videos too.

Q: Can I ask for pictures with the monks?
A: Sure, I don’t think they mind.  Good karma goes well with good camera.

Q: What if I have questions for the monks?
A: The monks’ driver is a Tibetan guy called Tenzin who speaks English.  You can ask him anything.  He is easy to narrow down because only about half of all Tibetans in the world are named “Tenzin” (including the Dalai Lama and one of his brothers).

Q: Can I bring my friends?
A: Definitely.  Even if your friend is a mandala-loving ninja.

Q: How do you plan to protect the mandala during construction and breaks?
A: Our original plan was to hire a bunch of kung-fu monks from Shaolin, but that didn’t work out.  So we plan to put stanchions around the mandala, and ask people to control their destructive urges until after TGIF.  We are aware that stanchions are not as cool as kung-fu monks from Shaolin, but they are somewhat cheaper.

Q: Can I make a donation?
A: Yes, just give money to the monk at the table and take whatever souvenior you like.

Never become a vampire on a bad-hair day

My approach to leadership

This calmness is our natural birthright